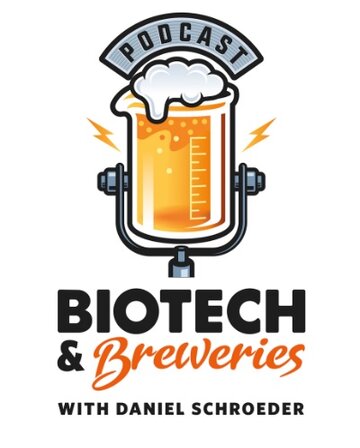 Well, I chose the Biotech and Breweries podcast series because I thought it would be about biotech in breweries...there are 6 InnovATEBIO member programs that have degrees or certificates in Brewing Science and Brewery Operations so I wanted to hear more about the role of biotech in beer.  However, I found out that in fact this series is "Exploring San Diego's biotech landscape with a beer (or two) in hand".  Not quite what I had in mind, but still great!

The first episode I listened to was "Viracta and Burgeon Brewing Company".  Host Daniel Schroeder and his listeners (like me) got to hear about 4 beers from the craft beer brewery Burgeon Brewing.  I don't drink beer very much, but it was obvious that Noah Scoville, Manager at Burgeon Brewing, is passionate about what he produces and drinks.

And after the drinks were covered, Dan Chevallard, COO and Chief Financial Officer of Viracta, spoke about his journey with Viracta, a precision oncology company targeting virus-associated malignancies such as EBV+ cancers. Not only science was covered, but ideas about how to fundraise too, another incredibly important part of a company's puzzle. Dan Chevalland's advice for people trying to start a company--"have a mentor". Great advice for all of us!