Human bodies have been shown to play host to many different types of bacteria, viruses and yeast even when healthy. More and more evidence points to the non-human component of our bodies as having a profound effect on our health. When I learned about cancer, I was taught that human cancer is caused by human cells that go rogue, either due to genetics, or environment, or both. And that is still true. However recent discoveries have added additional factors to the story of cancer. Max Kozlov wrote a review that was published in Nature highlighting two recent publications that discuss the presence of tumor-associated fungi and bacteria: Pan-cancer analyses reveal cancer-type-specific fungal ecologies and bacteriome interactions; Narunsky-Haziza, et al. Cell 185, 3789-3806; and A pan-cancer mycobiome analysis reveals fungal involvement in gastrointestinal and lung tumors; Dohlman, et al, Cell 185, 3807-3822.

Narunsky-Haziza et al. examined DNA and RNA sequencing data from tumor samples that had been previously analyzed for the presence of bacteria, and also examined stained cancer tissue microarrays. After carefully controlling for possible environmental contamination they found distinct fungal driven pan-cancer "mycotypes", combinations of fungi and bacteria that were found associated with types of cancers. Although bacteria and fungi interact with each other as well as the human immune system, it is not clear how tumor-microenvironments (nutrient-rich and immunosuppressed) may be non-competetitive "permissive" environments, unlike the gut where bacteria and fungi compete for resources and to survive the immune systems challenges.

These papers allude to the idea of using information about bacteria and fungi to help improve prognostic tools as well as exploring them as potential new therapeutic targets. Cancer is a horrible, often intractable disease---I am thrilled to hear about new ideas and approaches.  Take a look and see what you think! 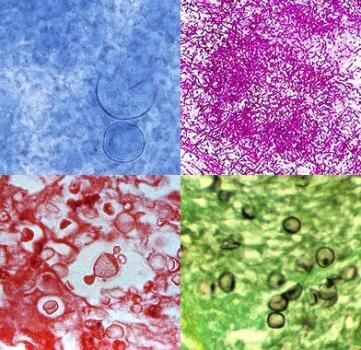