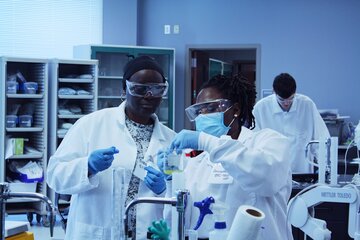 Her son, in his mid-thirties, wanted to change careers, the teller told Galindo. After completing the BioWork program, manufacturing company Grifols hired him with just his certificate.

“She told me about that, and I was kind of like, ‘You know, I’ve always been kind of interested in biology, technology,” Galindo, 22, said. “That’s when I applied for the same certificate program. And I kind of stuck by it.”

While Galindo was completing that program, he decided to pursue the associate degree – then received an email about the college’s brand new Bio Blend program. The National Science Foundation supported project blends applied engineering and biotechnology curriculum for bioprocess technology degree students like Galindo.

In December, Galindo will graduate with his associate degree and DeltaV certificate through the Bio Blend program. JCC is the only N.C. community college that offers training for DeltaV, an automated distributed control system, according to the college.

“It feels pretty good,” he said about his upcoming graduation. “Honestly it’s been a long time coming I feel like, so it’s very exciting.”

A ‘circle’ of impact

The dream for the Bio Blend program started as an idea for how to meet emerging advanced technological workforce needs.

“The college wanted to pilot the idea that if we blended the skills –if we took these applied engineering students who might go into maintenance roles at Caterpillar, Coyote, or Duke Energy – and we had them take the BioWork class so that they know how to properly gown and work in an aseptic environment in biopharmaceutical manufacturing, then that would that better prepare them for more options.” Julie Griffin, Bio Blend career coach at JCC

Since launching the program, 25 students have participated – 14 in the first cohort and 11 in the second cohort.

More than half of those students (53%) secured jobs with internship supervisors or at their internship site. Eighty-six percent of the first cohort enrolled in the second year of the program. Today, 10 out of those 12 work in biopharmaceutical manufacturing. One of the other students delayed plans due to a military obligation, and the other found employment in non-biopharmaceutical manufacturing.

“We had 100% satisfaction from employers with our students,” Griffin said, citing a survey. “And 80% that responded said that our students were more prepared than students who did not come through Bio Blend.”

The median annual salary for biotech jobs in Johnston County is $69,586, according to the report.

Before Galindo started at JCC, he worked as a shift lead at a Walgreen’s pharmacy. He applied to pharmaceutical company Novo Nordisk but was not hired.

Now, two courses shy of his associate degree, he is working at Novo as a manufacturing associate after starting last month. The median pay for that position is $27 per hour, according to Glassdoor’s employer review data.

“Those students can graduate and go straight to work. And they can earn 20-something bucks an hour, with bonuses, health insurance, sick days, vacation, retirement,” Griffin said. “So we’re filling the pipeline, and we’re maybe changing the direct trajectory of where the students would go if they didn’t have access to the programs. I get really excited when we talk about that.”

The college’s biotechnology program helps students, the college, and industry, she said.

Industry partners donate the majority of the program equipment, and JCC provides customized training for employers on campus. The college will offer training three weeks of almost every month in 2023.

“That really shows their trust in us because they keep coming back,” Robbins said.

For students, the training helps those who want to remain in Johnston County do so. They don’t have to commute or move to the Research Triangle Park to find biotechnology jobs, Robbins said.

“Employers interview right out of classes,” Griffin said. “I mean, they come to our Bio Work certificate classes and interview those students right on the spot. We can’t fill all of their jobs.”

The college wants to keep diversifying its biotechnology program, in part by exposing more students to biotechnology.

“We’ve got to keep doing what we’re doing and keep exposing them (young students) to what biotechnology is,” Robbins said. “That there actually is a career there.”

One way JCC does that is through summer camps for elementary-aged students and middle school visits. The college also taught BioWork at Clayton High School and is working to implement the course at Smithfield-Selma High School.

The college is also focused on increasing neurodiversity in STEM fields, in part through the Bio Blend program. JCC announced it would expand its Bio Blend pilot last April due to the first cohort’s success. The college received a $635,012 grant from the National Science Foundation (NSF) to expand BioBlend. The first NSF grant was $283,000.

This year’s cohort includes supports to help increase diversity and inclusion for neurodivergent STEM students with a focus on autism. The college will partner with local educators to help identify and match people with autism who are interested in the program. Then, select local employers will provide internships and “promote a neurodivergent work environment by encouraging staff to attend JCC-sponsored training provided by local autism services providers,” JCC said in its email announcing the expansion.

This year’s grant also allowed all applied engineering and bioprocess technology degree students, like Galindo, to access the program. All of those students will learn DeltaV, even if they don’t enroll in the Bio Blend program specifically.

“One huge benefit that came indirectly from BioBlend,” Griffin said, was the creation of flexible labs. During the program’s first cohort, four or five students were hired prior to graduating. Hiring staff to offer flexible lab hours made it possible for those students to work while also meeting lab requirements.

For Galindo, those labs were a big help – even if he was used to working while going to school.

“If we didn’t have flexible labs, I don’t know that he would have been able to accept that job until he had his graduation under his belt – or forfeit the degree,” Griffin said. “So this allows them to do both.”

Though Galindo didn’t set out at JCC with plans to earn an associate degree, he is glad that is going to.

The pharmaceutical industry is growing, he said, so it’s the right time to enter. He would “100%” recommend other students take Bio Blend, too.

“If I wouldn’t have taken this program, I don’t know if I would have gotten into the job that I’m in now,” he said. “So the time and money spent taking all these classes and certifications was definitely worth it, because it advanced me in the career that I aspire to have.”