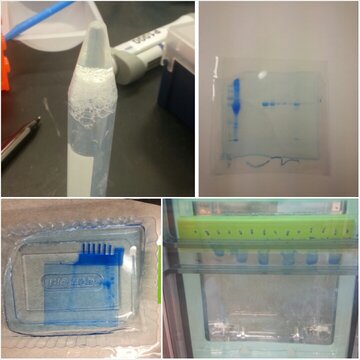 When I was first introduced to acrylamide gels way back in Fundamentals of Biology, I did not have the privilege of assembling the reagents. But I can remember just loading the gel was intimidating at first, trying to maneuver the fine tip between the plates and hopefully into the barely distinguishable wells of the gel. In the first technique class in SCF's Biotechnology program (nicknamed 'The DNA Class') I developed a false sense of security with gels. Because we mostly handle DNA, the gels that were made and ran in that class were aragrose gels. In my opinion, agarose gels are easier to assemble and run then an acrylamide gel. The second technique class (the 'RNA Class') we 'transition' from agarose gels into acrylamide. Or more like we're thrown into acrylamide, either works. I'm not sure if it was beginners luck, or if the earth was at just the right angle in its rotation, but my very first acrylamide gel in which I had to set up a casting tray and assemble to reagents went off without a leak! Yea for developing another false sense of security. However, that streak didn't last long as I had to remake my second gel three times because of leaks or the gel would solidify before I had a chance to pour it into the casting trey. This is what developed my love/hate relationship with acrylamide gels. I'm not sure what I hated the most, having my reagents polymerize before I made it back to my work bench to pour the gel into the casting trey. Or tearing the gel as I was trying to remove it from the casting trey in order stain it. Now, I have learned to love these gels as they've been pretty much the only gels I have worked with in the final technique class of the program. Being in the third technique class (the 'protein class') we have ran multiple SDS acrylamide gels, Iso-Electric Focusing gels, and westerns. Working with these gels this often I've learned some key things to avoid set backs:
1. Double and triple check spacer placements.
2. Your microspatuala can be your best friend and worst nightmare
3. Once you add the TEMED, vortex and RUN
4. No use crying over gels that solidified too quickly.
5. Adjust TEMED accordingly

Mental Gymnastics
Officially ending the first week of a new semester, it has been made clear of the mental gymnastics that this semester will hold. For the next 15 weeks I will be attempting to understand the fun world of bioinformatics. So to sum up my first week of the class this is what I've learned:
Bioinformatics is the class where you will learn how to read forwards, backwards, upside down, standing on your head with your tongue hanging out and squinting your eyes with your head tilted slightly to make out the sequence. But it is important to remember, there's no whining in bioinformatics =D
This is going to be an exciting semester.