Science in the Mall, Y’all Podcast

I never knew there was a bioscience incubator inside the Austin Community College (ACC) Highland mall location! And not only is the Austin Bioscience Incubator there but Dan Dillard hosts a podcast called ‘Science in the Mall, Y’all’--so we can all learn about it.  During the podcast Dan has conversations with businesses and organizations associated with the incubator and learns why these startups were, well, started!  The science is there in the conversation, but even more so the listener gets to hear what really motivated the entrepreneurs.  The podcast series started in May, 2020 but has already amassed a long list of entertaining episodes.  I listened to the very first one to find out more about the series. In that episode Dan talked with Incubator Director Nancy Lyon and Incubator employee Marcia McCallum about how an incubator came to be in an abandoned mall.  Director Lyon detailed how the Austin Community College biotech program needed internships, and the state government wanted Austin to be more of a biotech town so, one thing led to another, concentrated effort all around, and soon four stores in an abandoned mall became lease-able lab spaces, and with that internships became available to the students of the biotech program.  Marcia was one of the first interns, and so has seen the incubator grow from ‘stuff in boxes’ to a dynamic, thriving collection of forward-thinking companies.

I also listened to a Science in the Mall, Y'all podcast about the company Speragen. Speragen was founded by Alice McConnell, a former civil engineer, who's two children were born with a devastating rare inborn error of metabolism.  Alice decided to meet the disease head on and the ACC incubator was just the place to support her company as she and her colleagues work to find a treatment, and ultimately a cure. Her progress has been amazing, they have a clinical trial going on right now and there is a lot of hope. Going to the mall has a whole other meaning down in Austin Texas.  Listen in when you can!

And--if you finish all of those, or want a change of pace, take a look at InnovATEBIO's blog: Podcasts on Science for more listening fun. 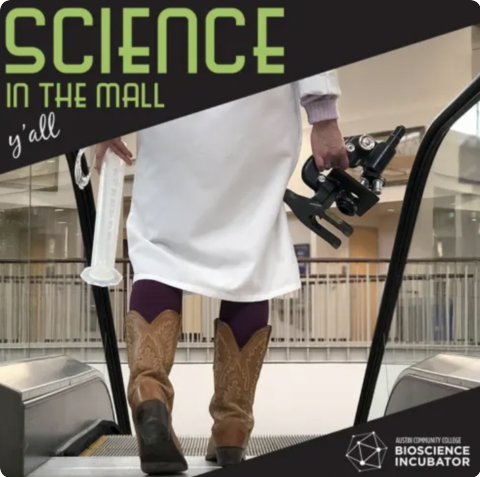