The Queens of Troubleshooting 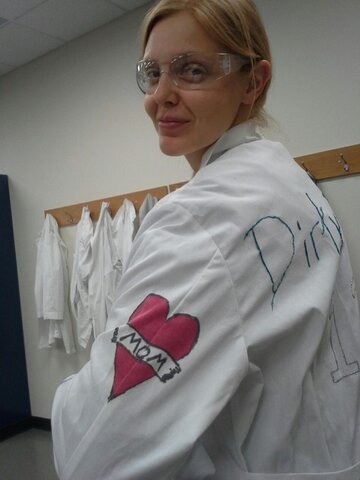 My lab partner, Allison, and I have been assured that troubleshooting is a desired skill and that we will be grateful for our current Proteins woes later in our careers. And I'm proud to say that despite repeated setbacks, we've put our big-girl lab coats on, looked that ?-galactosidase in its ornery eye, and paraphrased the words of the incomparable "Rowdy" Roddy Piper in the best B movie ever, They Live:

"We have come here to chew bubblegum and purify proteins... and we're all outta bubblegum."

A run-down of the problems we've encountered and the ferreted out causes:

A Lucy and the liquored-up bon-bon factory style mix up with data, due to us performing the assays after every purification while simultaneously repeating the assays from previous steps with our saved aliquots, trying to find our error. We found this error while figuring out the yield and seeing values increase after every step: at one point I

So now here we were, feeling pretty good. It was a long road, but hey, veni, vidi, vici, right? We were all caught up and eagerly looked forward to using ion-exchange chromatography for the next round of purification. We spent all of last semester in Chromatography class, so we were totally feeling like "hey, I got this."

And then two peaks eluted off of the column. WHY IN THE NAME OF ALL THAT IS SWEET AND GOOD AND PURE IN THIS WORLD DID TWO PEAKS ELUTE OFF OF THAT COLUMN!?!?!?